Are You a Man or a Mouse? (poster) 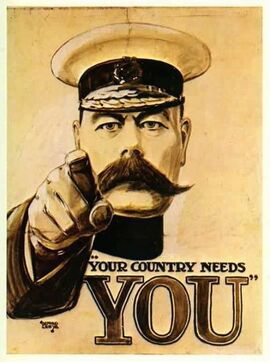 One of many of Field Marshal Horatio Herbert Kitchener's recruiting poster.

The Great War had turned into a war of attrition. Neither side were moving and the lives already lost had made a substantial impact on the Regular and Territorial Force already in place. The BEF had to retreat from Mons. This resulted in needing more men if it was to successfully provide the support the French desperately needed to hold off the overwhelming German forces on the Western Front.

Field Marshal Lord Kitchener called for volunteers to join the army and help with the fighting overseas. The volunteers would join for a duration of three years, giving time for adequate training before being shipped abroad. Lord Kitchener had promised that friends who joined up together would be able to train and serve together; an interesting strategy used to gain the numbers required. Little did he know at the time how successful this was to become. Within just three weeks 100,000 men had volunteered for Kitchener’s New Army; men from many different backgrounds across the entire country. These men would be formed of ‘local’ battalions relative to the county/town in which enlisted. They became known as the ‘Pals’ battalions.

Kitchener’s recruiting poster and the propaganda behind the drive to bring new recruits in had worked. The powerful wording alone of “YOUR COUNTRY NEEDS YOU” was the backbone of patriotism. This was to have an effect on Lord Lonsdale of Cumberland. He wanted to do his part in the war by recruiting men from Cumberland to form a pals battalion in his name, the Lonsdales. He too followed in Lord Kitchener’s footsteps and created a powerful, yet controversial, recruiting poster that caused a storm with certain officials within the county. 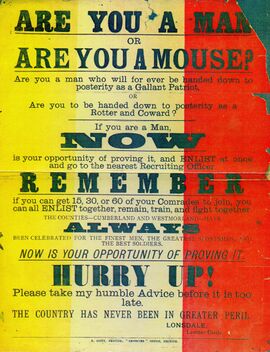 “ARE YOU A MAN OR ARE YOU A MOUSE?” showed prominently; a striking question to impose on anyone. This terminology was used skilfully. Would it have instilled fear or would it have made every man who read it even more patriotic than he was before? Maybe it was both. Hugh Lowther, 5th Earl of Lonsdale obviously chose his words carefully as to create an impact verbally what the war had done physically. He continued with "Are you a man who will for ever be handed down to posterity as a Gallant Patriot or Are you to be handed down to posterity as Rotter and Coward?" Strong words sure enough to cause a stir.

It’s not difficult to see why this poster caused so much controversy. Nonetheless, whichever way the reader interpreted it, it was to have a significant impact on the recruiting process that Lord Lonsdale wanted. Men from all over the county joined up to serve king and country. Men who were farm servants and general labourers, shopkeepers, miners, clerks, industrial workers and shepherds all wanted to do their bit. The poster continues with "The counties Cumberland and Westmorland have always been celebrated for the finest men, the greatest sportsmen, and the best soldiers. Now is your opportunity of proving it." Gallant words from a patriotic Earl who looked after his men using his own money to finance the battalion in the best way he could. In contrast to this, before the outbreak of war, Lord Lonsdale was a friend of the German Kaiser who, on several occasions, had been a guest at Lowther Castle on his personal estate.

The war had changed many things and men on opposing sides could no longer benefit from friendships they may have shared in the past.