Village of Candas, the home of the 1st Battalion for several weeks in May and June 1917.

After the battle of Monchy-le-Preux, the 1st Border Regiment spent the remainder of May and the majority of June at a small village called Candas, located in the Picardy region of the Somme. They spent their time away from the rigors of battle in pleasant surroundings, as the war diary states, a "comfortable, clean little village, beautifully situated."[1] However, the peace and tranquillity of Candas would not be their home for too long and just when they the men of Battalion had become accustomed to a slightly more relaxed lifestyle, all be it temporarily, they would find themselves on the move again. It was the 26 June and the journey before them would take them back to Belgium on the banks of the Yser Canal. They entrained at Doullens for Proven where they were moved by bus and then route march to their new accommodation in the support trenches of the Canal. Without any delay they were involved in active patrolling on the front line, a duty that more often than not amounted to needless casualties. A few days later, on the 1 July, a young second-lieutenant by the name of D. Macleod, M.C., was killed on this duty along with three other men. Macleod’s body could not be reached at the time because of heavy sniping; however, they knew where his body lay and could only wait for circumstances to change in their favour before making the attempt to go out into the open to retrieve it. This was achieved when Private Williamson, who on the 5th, managed to beat the odds in recovering Macleod’s body. 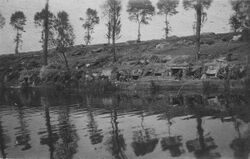 The next three weeks were spent at Proven, the small village they had spent time at more than once before. It was a place they were getting to know well, like many of the other small villages they had stopped at or passed through on their journeys, both in France and Belgium. On the 31st the Battalion was employed in working parties very close to the front line for the construction of roads from Clarges Street to the Canal at Boesinghe and then across the canal to Artillery Wood. The weather during this period was dreadful, particularly at a time when they would have benefited from drier conditions. As with any activity close to the front line, it was obvious that there would be some casualties; Captain A.V.H. Wood and 13 N.C.O.s and men were wounded while C.S.M. Randolph and 8 men were killed. In addition to these, 3 men were also missing but when the time came, they were able to safely get the field guns across the Canal ready for the advance.

The weather showed no sign of improving and on the 2 August, the diary states it "was another fearfully wet day, fighting practically impossible. St. Julien was lost during the night and retaken this morning." Ten days later the Battalion were under heavy shelling in the front line and in a short space of time, no more than a day, there were over 50 casualties. There didn’t seem to be and end to the number of casualties that were mounting almost on a daily basis. Some days were far better than others but it seemed that not even a single day would pass by without someone from the companies becoming victim of shelling, machine gun fire or sniping, not to mention those that were falling sick due to a multitude of different illnesses rife in the trenches. A few days later on the 15th each of the companies of the Battalion began to leave their position at intervals to a new assembly point east of the Steenbeek.[2] This was done in preparation for the second phase of the Third Battle of Ypres. The route took them from bivouacs at Bluet Farm via Bridge Street, Saules Farm, Captain’s Farm and Signal Farm. It was here that the Battalion Headquarters was established for the time being.

Two Brigades, the 88th and 89th, of the 29th Division, were to form the front line whilst the 86th was to remain in support. The 1st Battalion Border Regiment was still located east of the Steenbeek behind the King’s Own Scottish Borderers in a formation of B and D Companies in front and A and C Companies in support. The companies were commanded by the following officers:

As Wylly writes, the attack of the 29th Division started:

“from the general line of the Steenbeek, Passerelles Farm was carried as was also Martin’s Mill on the right, then crossing the abandoned railway line, the village of Wijdendrift was reached and a line established well to the N.E. of that place. The first message sent back from the front and received at 6.40 came from Passerelles Farm and stated that the so-called “Blue Line” had been taken, but less than an hour later it was reported that the advance was held up on the Blue Line by machine gun fire, and later still a message from Captain Ewbank confirmed this, saying that the K.O.S.B.’s were stopped by machine gun fire from a “pill box” near what appeared to be Montmirail Farm.” [3] 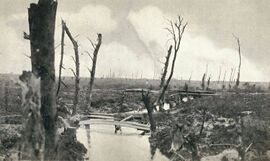 The battle they had endured was a challenging one for several reasons, but simply owing to the nature of the ground they crossed, as well as fighting a formidable well-trained enemy, ensured they had a difficult time advancing to their objectives and reaching a successful outcome. The ground was, by its very characteristic, swampy yet "touch and direction were admirably kept throughout and endurance displayed by all ranks was beyond all praise, as the 'going' was in an appalling state, and during the previous three days the Battalion held the firing line for forty-eight hours and carried out two reliefs under shell fire."[4] There was no escaping casualties even with the successful outcome. Those who became casualties up to week ending the 17 August 1917 amounted to Second-Lieutenant G.F. Hamlett and 25 other ranks killed; Captain A. Fulton, Second-Lieutenants J.B. Trotter and M.C. Nicholson and 105 other ranks wounded, in addition to Second-Lieutenant H.T. Thompson and 22 N.C.O.’s and other ranks missing.