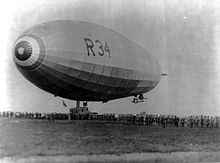 Airship: A dirigible balloon, an aircraft floating in air owing to its being filled with gas which is lighter than air. Propelled by motors driving air-screws (propellers). A rigid airship is one in which numerous gasbags are contained in a rigid framework so that if one or more are punctured the machine does not collapse. All Zeppelins are "Rigids." In a non-rigid airship the gas is contained in one big bag, possibly with internal partitions. If punctured all gas leaks away, or whole gasbag (envelope) may tear, and collapse. It can be deflated and transported by sea or land. A semi-rigid airship has a single, or partitioned, envelope, and is liable to sudden deflation, but being supported by long boom below, to which car or "gondola" is suspended, will not fold up and collapse suddenly when merely leaking. [1]

The above term is listed in our glossary of words and phrases of the Armed Forces of the United Kingdom of Great Britain during the Great War, which also includes: technicalities, trench slang, expressions in everyday use, nicknames, sobriquets, the titles and origins of British and Commonwealth Regiments, and warfare in general. These words and phrases are contemporary to the war, which is reflected in the language used, and have been transcribed from three primary sources (see contents). Feel free to help improve this content.
Browse other terms: Contents – A B C D E F G H I J K L M N O P Q R S T U V W X Y Z
Retrieved from "https://thelonsdalebattalion.co.uk/w/index.php?title=Airship&oldid=19318"
Category:
Cookies help us deliver our services. By using our services, you agree to our use of cookies.