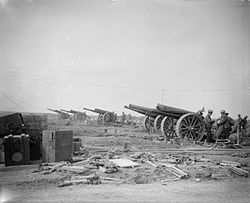 An artillery battery, within a military setting, is a unit of guns, mortars, rockets or missiles so grouped to facilitate better battlefield communication and command and control, as well as to provide dispersion for its constituent gunnery crews and their systems. The term is also used in a naval context to describe groups of guns on warships. Historically the term "battery" referred to a cluster of cannon in action as a group, either in a temporary field position during a battle or at the siege of a fortress or a city. Such batteries could be a mixture of cannon, howitzer, or mortar types. A siege could involve many batteries at different sites around the besieged place. The term also came to be used for a group of cannon in a fixed fortification, for coastal or frontier defence. During the 18th century "battery" began to be used as an organisational term for a permanent unit of artillery in peace and war, although horse artillery sometimes used "troop" and fixed position artillery "company". They were usually organised with between six and 12 ordnance pieces, often including cannon and howitzers. By the late 19th century "battery" had become standard mostly replacing company or troop.

In the 20th century the term was generally used for the company level sub-unit of an artillery branch including field, air-defence, anti-tank and position (coastal and frontier defences). Artillery operated target acquisition emerged during the First World War and were also grouped into batteries and have subsequently expanded to include the complete intelligence, surveillance, target acquisition and reconnaissance (ISTAR) spectrum. 20th-century firing batteries have been equipped with mortars, guns, howitzers, rockets and missiles.[1]

The above term is listed in our glossary of words and phrases of the Armed Forces of the United Kingdom of Great Britain during the Great War, which also includes: technicalities, trench slang, expressions in everyday use, nicknames, sobriquets, the titles and origins of British and Commonwealth Regiments, and warfare in general. These words and phrases are contemporary to the war, which is reflected in the language used, and have been transcribed from three primary sources (see contents). Feel free to help improve this content.
Browse other terms: Contents – A B C D E F G H I J K L M N O P Q R S T U V W X Y Z
Retrieved from "https://thelonsdalebattalion.co.uk/w/index.php?title=Battery_(artillery)&oldid=19652"
Category:
Cookies help us deliver our services. By using our services, you agree to our use of cookies.