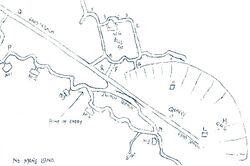 The Bull's Eye was a series of German trenches located north-east of the fortification known as the Leipzig Redoubt, also known as the Granatloch, on the bulging prominence of the Leipzig Salient near the villages of Authuille and Thiepval. The trenches were constructed in a rectangular formation, comprised of dug-outs at least 22ft below ground and linked both the quarry and the Thievpal track or road trench, which runs from Authuille Wood to Thiepval.[1] The redoubt and immediate area was built with unrivalled German engineering along a section of frontage that was strongly-held with machine gun posts and inaccessible barbed wire. It was a formidable sight and it was the scene of a daring night right on the 5/6 June undertaken by the Lonsdale Battalion in a bid to obtain vital intelligence about the Bull's Eye, the quarry and to recover as many prisoners as possible.

Five members of the raiding party's lives were lost, a further seventeen wounded and a sergeant was missing. Despite the tragic loss of Lieut. Barnes, who himself was shot dead whilst looking for his missing revolver on returning to No Man's Land, Colonel Machell, commanding officer of the Lonsdale Battalion, wrote of the mission as a "complete success." In addition to taking eleven German prisoners and twenty-five others killed, the "men did splendidly." [2]

The above term is listed in our glossary of words and phrases of the Armed Forces of the United Kingdom of Great Britain during the Great War, which also includes: technicalities, trench slang, expressions in everyday use, nicknames, sobriquets, the titles and origins of British and Commonwealth Regiments, and warfare in general. These words and phrases are contemporary to the war, which is reflected in the language used, and have been transcribed from three primary sources (see contents). Feel free to help improve this content.
Browse other terms: Contents – A B C D E F G H I J K L M N O P Q R S T U V W X Y Z
Retrieved from "https://thelonsdalebattalion.co.uk/w/index.php?title=Bull’s_Eye&oldid=8745"
Categories: