The Year 1915 Illustrated/A Heroine of the War 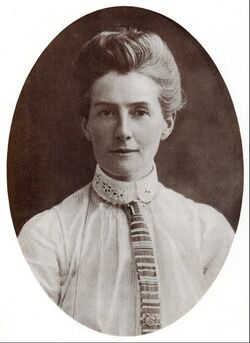 Nurse Edith Cavell, Heroine and Martyr
Reproduced by the courtesy of the "Illustrated London News"

THE whole world was deeply moved during the month of October, by the news which was received from the American Minister at Brussels, that the German Military Governor in Belgium had permitted the death sentence to be carried out on Miss Edith Cavell, who had been charged and convicted on her own admission of harbouring and assisting English and Belgian subjects to escape, who were in danger in that country. A wave of horror and indignation met the news of the execution, in every ciliated country. In America the press was unanimous in condemnation of the deed. The Chicago Journal referring to it said, "Assisting prisoners to escape is by military law a crime, but by every instinct of humanity it is a virtue, a virtue inseparable from all Western ideals of womanhood."

Miss Cavell was an English lady, who from the commencement of the war had given herself to the nursing of wounded soldiers in Belgium. She had tended many wounded Germans with the same devotion as characterised her ministration to the Belgians. Nurse Cavell died like a true heroine. This is witnessed by the report made by the Rev. H.S.T. Gahan, British chaplain at Brussels, touching his last interview with her on the night she was executed. Mr. Gahan says:

“On Monday evening, October 11th, I was admitted, by special passport from the German authorities, to the prison of St. Gilles, where Miss Edit Cavell had been confined for ten weeks. The final sentence had been given early that afternoon. To my astonishment and relief I found my friend perfectly calm and resigned. But this could not lessen the tenderness and intensity of feeling on either part during that last interview of almost an hour. Her first words to me were upon a matter concerning herself personally, but the solemn assertion which accompanied them was made expressly in the light of God and eternity. She then added that she wished all her friends to know that she willingly gave her life for her country, and said:

“'I have no fear or shrinking; I have seen death so often that it is not strange or fearful to me.' She further said: 'I thank God for this ten weeks' quiet before the end. Life has always been hurried and full of difficulty. This time of rest has been a great mercy. They have all been very kind to me here. But this I would say, standing as I do in view of God and eternity, I realise that patriotism is not enough. I must have no hatred or bitterness towards anyone.'

“We partook of the Holy Communion together, and she received the Gospel message of consolation with all her heart. At the close of the little service I began to repeat the words, ' Abide with me,' and she joined softly in the end. We sat quietly talking until it was time for me to go. She gave me parting messages for relations and friends. She spoke of her soul's needs at the moment, and she received the assurance of God's Word as only the Christian can do. Then I said 'Good-bye,' and she smiled and said, 'We shall meet again.'

“The German military chaplain was with her at the end, and afterwards gave her Christian burial. He told me, 'She was brave and bright to the last. She professed her Christian faith and that she was glad to die for her country. She died like a heroine.'”

The memory of Nurse Cavell will never die. She will rank with Florence Nightingale as one of the noblest types of English womanhood.