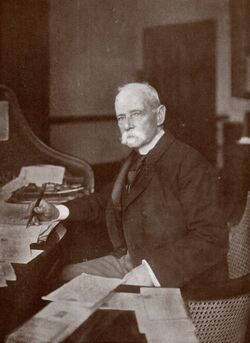 ON Sunday, November 15th, 1914, the news was received in England of the sudden death of Field-Marshal Lord Roberts in France, where he had gone to visit the Indian troops. Ever since the war had started Lord Roberts had served his King and country in a hundred different ways. He had collected field glasses and saddles for the troops, he had given words of encouragement to many of the new battalions, and when he heard that the troops from India had landed in France he felt that the most useful thing he could do was to forget his four-score years and cross the channel to greet them. This he did, and everywhere he went a welcome awaited him. The exertion, however, proved too much for his strength. He caught a chill which speedily developed into pneumonia and, before his comrades in arms could realise that he was critically ill. He had passed away from them.

The nation received the news with profound and universal sorrow. Lady Roberts acceded to the wish that a public funeral should be be accorded the famous Field Marshal, and on November 19th he was laid by the side of the Duke of Wellington and Lord Nelson in St. Paul's Cathedral. Lord Roberts was born at Cawnpore, India, in 1832. He served throughout the siege and capture of Delhi during the Indian Mutiny of 1857, and won many distinctions, including the Victoria Cross, during his military career in India and Afghanistan. He was Commander-in-Chief in India from 1885-1893, and after the loss of his son in the Boer War, he went out to South Africa as Commander there. At the conclusion on the war, Lord Roberts was created an Earl and a K.G.