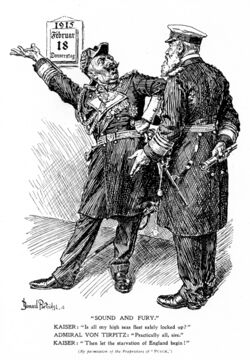 Sound and Fury (The Kaiser and Admiral von Tirpitz). Cartoon by Bernard Partridge.

THE war had been waged for exactly six months, when Germany made its declaration of a "blockade" of England, to come into operation on February 18th. All the waters round Great Britain and Ireland, including the whole of the English Channel, were proclaimed a war region, and passenger ships and merchantmen of neutral countries were to be destroyed without warning.

This new outlet for the German policy of "frightfulness" aroused the greatest indignation in the United States and the neutral countries, and many protests were lodged against it. But the German Admiralty, having committed itself to the role of a pirate, was determined to test the use of the submarine in this nefarious work — Hague Conventions and recognised laws of war and humanity did not count with Admiral Tirpitz and his staff. The German High Seas Fleet had been destroyed or driven into seclusion at Kiel; the submarine and the mine alone were left as effectives. And so commenced a chapter in the history of the German Navy which can only be designated as piracy of the worst kind.

As Mr. A. J. Balfour (First Lord of the Admiralty) well said in a letter to a correspondent on September 5th last, the new piracy was "no doubt adopted with extreme reluctance and many searchings of heart. The admission of failure is in itself unpleasant; and though we cannot regard the Government responsible for the Belgian atrocities as either scrupulous or humane, even the most reckless of Governments does not desire to perpetrate unnecessary crimes. As to what the German navy must have felt about the new policy, we can only conjecture. But German sailors are gallant men; and gallant men do net like being put on a coward's job. They know well enough that in the old days, which we are pleased to regard as less humane than our own, there was not a privateersman but would have thought himself disgraced had he sent to the bottom unresisting merchant ships with all hands on board; and it can have been no very agreeable reflection, even to the German Navy League, that the first notable performance of the German fleet should resemble piracy rather than privateering."

Mr. Churchill, in the House of Commons on February 15th, voiced the universal feeling when he declared:

"Germany cannot be allowed to adopt a system of open piracy and murder on the high seas, while remaining herself protected by a bulwark of international instruments which she has utterly repudiated and defied, but which we, much to our detriment, have respected. So far we have not attempted to stop imports of food, we have not prevented neutral ships from trading direct with German ports. We have allowed German exports in neutral ships to pass unchallenged. The time has come when the enjoyment of these immunities by a State which has, as a matter of deliberate policy, placed herself outside all international obligations, must be reconsidered. Further declarations on the part of the Allied Governments will promptly be made which will have the effect for the first time of applying the full force of naval pressure to the enemy."

Failure of the policy[edit] 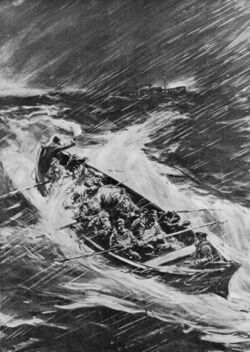 A torpedoed collier's crew are left to drown.[notes 1]

The results of the German submarine warfare may be summarised from the statement made by Mr. Balfour on September 5th, as follows:—

(I) Many inoffensive persons, women and children, as well as men, neutrals as well as belligerents, have been robbed and killed.
(2) British vessels to the total of 104, with a tonnage of 304,428, had been sunk, many without warning, by the end of July, also 105 trawlers.
(3) The losses inflicted upon German submarines have been formidable. Some of the crews have been rescued and interned, but from the very nature of submarines it must often happen that they drag their crews with them to destruction. The measures adopted by the English Admiralty have increased the risks run by these craft a hundredfold.
(4) The British mercantile tonnage is greater than when the war began.
(5) The British fighting fleet has become relatively stronger than it was thirteen months ago.

In addition, the German Government has become involved in a network of misunderstandings with the United States, from which it will be difficult for her to get free without loss of prestige as a civilised power. Further, there are indications that even German opinion has at last revolted against lawless cruelty, and adopting the concluding words of Mr. Balfour's letter: "the authors of the submarine policy have had time to measure its effects," and "deeds which were merely crimes in May, in September are seen to be blunders."

March 28th — Elder Dempster liner Falaba torpedoed to south of St. George's Channel, 100 passengers and members of crew drowned or killed by explosion.
May 7th — Cunard liner Lusitania torpedoed and sunk off the Old Head of Kinsale, with loss of nearly 1,500 men, women and children.
July 1st — British steamer Armenia shelled and torpedoed off Cornish Coast, twenty-nine of crew drowned, many of them Americans.
July 30th — Leyland liner Iberian sunk, three Americans killed.
August 19th — White Star liner Arabic sunk with loss of thirty-nine lives.
September 4th — Allan liner Hesperian torpedoed and sunk off the Fastnet with loss of twenty-five lives. This outrage was committed without warning, after the intimation to America by the German Government that passenger ships were not in future to be so attacked.

The loss of the Lusitania[edit] 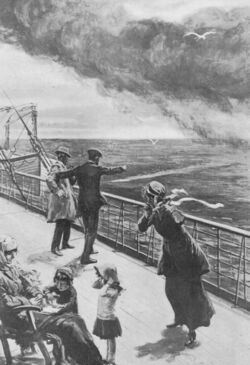 Murder on the High Seas. Drawn by Philip Dodd for The Sphere.

On Sunday, May 7th, the famous Cunard Liner the Lusitania was steaming on a placid sunlit sea, only a few miles from the Irish Coast, when a torpedo, dispatched without warning by a hidden, merciless foe, shattered her side and sent her with awful suddenness to her doom. A week previously the German Embassy at Washington had issued a most astounding statement that it was intended to sink the vessel, but so improbable did it appear that the threat would be carried out, that very few passengers cancelled their sailings. There were altogether 2,160 persons on the ship, and of these nearly 1,500 were drowned as a result of the cowardly attack of the German submarine.

The vessel was steaming at eighteen knots at the time, and, as it was impossible to reverse her engines, she made way for about ten minutes. The boats, accordingly, could not be lowered immediately, and the starboard boats were useless in consequence of a heavy list. Altogether between ten and a dozen boats and rafts got away before the Lusitania sank, about twenty minutes after she was struck. The news of the dastardly outrage was received with the greatest amazement and indignation especially was this the case in the United States, for many distinguished American citizens lost their lives. The death-roll included, among others, Mr. A. G. Vanderbilt, Mr. Charles Frohman, Mr. Justice Miles Forman, Dr. F. S. Pearson, and Mr. Elbert Hubbard, an author of international reputation, and Mr. Charles Klein, the play-wright. Captain Turner, who was in command of the ship, was picked up after it had sunk, and was saved.

The sinking of the Lusitania was the subject of a Board of Trade inquiry in England, as a result of which it was confirmed that the vessel was in no way armed, nor was she being used for the transport of troops. The United States Government addressed a strong Note to Berlin in which it was intimated that a repetition of such wanton attacks on American lives would be regarded as "deliberately unfriendly."

So little heed did von Tirpitz take to these representations that right up to September the German submarine policy was continued of sinking liners without warning. The United States Government, whilst rejecting the excuses made for such outrages, pressed hard for a change of policy on the part of Germany. In the latter part of August reports were current that Germany had agreed to sink no more liners without warning, but the earnest of this undertaking was immediately discounted by the sinking of the White Star liner Arabic, off the Irish Coast, no warning whatever being given. Thirty-nine people lost their lives, including two Americans. Whilst Germany was busy making excuses for the additional outrage, the Hesperian of the Allan line met a similar fate. Both these vessels were outward bound for America and for this reason alone they could not be supposed to be carrying munitions of any description.