The Year 1915 Illustrated/The War on the Seas

EARLY in November news was received in England of a serious Naval reverse off the coast of Chile. It had been known that the Germans had a number of commerce-raiding cruisers at large in the pacific and the British Admiralty had commissioned Admiral Cradock to round up these vessels. The British squadron set apart for the task consisted of the cruisers Monmouth, Good Hope, Glasgow, the Otranto, and a pre-Dreadnought battleship, the Canopus. It appears that Admiral Cradock underestimated the strength of the enemywhen he sighted the opposing squadron near Coronel on the afternoon of November 1st. From accounts received, it is evident that the Canopus never reached the scene of the engagement in time to take part in it. In accepting battle with Admiral von Spee's cruisers the British Admiral entered on an encounter severely handicapped in the matter of ships and gun power. It also appears that the German Admiral, by clever manœuvring, managed to get the English ships into a position that silhouetted them against the skyline as the sun set, and this enabled his gunners to make deadly practice. The English squadron was at a further disadvantage by reason of the heavy sea which made it impossible to utilise certain of the lower guns. After putting up a plucky fight, both the Monmouth and the Good Hope were sunk with all hands, the last act of Admiral Cradock being to direct the Glasgow to make good her escape. This she was able to do and later gave a good account of herself on another occasion. The German ships engaged included the cruisers SMS Scharnhorst, SMS Gneisenau, SMS Leipzig, SMS Nürnberg.

Victory off the Falkland Islands[edit] 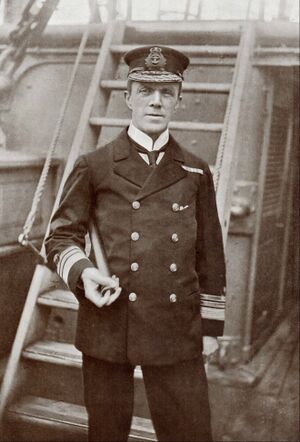 The sequel to the Battle of Coronel was published five weeks later. The world then learnt for the first time the measures which the British Admiralty had taken to make good the temporary loss of prestige which the Navy had suffered in the southern seas. The First Sea Lord had acted with great promptitude. Admiral Sir Frederick Strudee was commissioned to direct the operations of a strong squadron in the South Atlantic. Great secrecy was observed in sending out this squadron, and when the news reached England on December 9th that all but one of Admiral von Spee's cruisers had been destroyed in an engagement off the Falkland Islands there was considerable surprise at the overwhelming character of the victory. That the German Admiral was taken unawares there is little doubt. The official news of the battle was published by the Admiralty as follows:-

“At 7.30 a.m. on December 8th, the Scharnhorst, Gneisenau, Nürnberg, Leipzig, and Dresden were sighted near the Falkland Islands by a British squadron under Vice-Admiral Sir Frederick Sturdee. An action followed in the course of which the Scharnhorst flying the flag of Admiral Graf von Spee, the Gneisenau, and the Leipzig were sunk. The Dresden and the Nürnberg made off during the action and are being pursued. Two colliers were also captured. The Vice-Admiral reports that the British casualties are very few in number. Some survivors have been rescued from the Gneisenau and the Leipzig.”

To this news added on the following day the announcement that the Nürnberg was also sunk on December 8th, and that the search for Dresden was still proceeding. The main action lasted for five hours "with intervals." The Scharnhorst sank after three hours and the Gneisenau two hours later. No loss of any British vessel was reported. The Scharnhorst and Gneisenau were cruisers of 11,400 tons displacement, the Leipzig of 3,250 tons, and the Nürnberg of 3,450 tons.

One of the best accounts of the battle off the Falkland Islands appeared in the Manchester Guardian in the form of two letters by midshipmen on the Carnarvon. They brought out very plainly two characteristics of the modern sea fight: that it is a very leisurely business, and that there is very little place for combined battle tactics. It was 5.50 a.m. when the German squadron was sighted thirty miles off Port Stanley, where the British squadron was coaling. A couple of shots were fired by the Canopus at 9.5, the only share of the Canopus in the actual fighting. It was not for another hour, or more than four hours after the German ships were first sighted, that the British squadron weighed anchor. Then as the enemy were still twelve miles off, the crew of the Carnarvon washed, changed into clean clothes, and went for lunch. It was not until 12.45 that the Invincible, the Inflexible, and the Carnarvon devoted themselves to the Scharnhorst and Gneisenau, and for an hour or more, between 2.0 and 3.5, the German cruisers, by skilful manœuvring, got out of range. The superior speed of the British battle cruisers enabled them to renew the action. It is worth noting that despite the bigger guns of the British ships the battle was fought mostly within range of the German guns, so that superior weight rather than superior range decided the issue. Meanwhile, the smaller cruisers were being engaged and sunk over one hundred miles away. The German light cruisers threw mines overboard, but the British cruisers avoided them. Another account mentions that the Kent and Cornwall also took part in the action, which indicates the strength of the English attack. The total British casualties were ten killed and fifteen wounded.

AS a result of an explosion in one of the magazines, HMS Bulwark, a pre-Dreadnought battleship, constructed in 1899, was totally destroyed whilst at anchor in the Medway on November 26th. At the time of the explosion the vessel was loading ammunition, and the inquiry which the Admiralty made into the circumstances of the explosion did not reveal the actual cause of the disaster, but the evidence pointed to an internal origin. The loss of life was very heavy, the survivors numbering only fourteen out of a complement of 750.

Another disaster to the British Navy occurred at dawn on New Year's Day, when the battleship Formidable was torpedoed in mid-channel by a German submarine. Here again the loss of life was very great and the whole nation mourned for those who had sacrificed their lives at the call of duty. The courageous way in which both officers and men met their end when the ship was sinking will stand as one of the most inspiring stories in the annals of the sea. 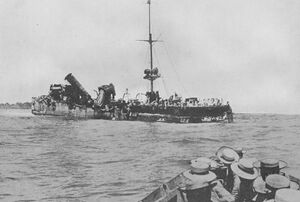 The last of SMS Emden

ON November 9th the German cruiser Emden, which since the outbreak of the war had caused much liveliness in the Indian Ocean, met her fate off the Cocos (or Keeling Islands). After leaving the Bay of Bengal, Captain Karl von Müller, her commander, had steered the vessel to Penang, entering the roadstead there flying a neutral flag, after having rigged up an additional dummy funnel. This disguise enabled him to get close enough to torpedo a Russian cruiser and a French destroyer. Then, putting his ship about, he made southward and landed a party at Direction island, one of the Cocos group, with the object of destroying the wireless station and cutting the cable. A wireless message, was, however, got off, and this was picked up by Australian cruiser Sydney, about fifty miles to the east. The Sydney sighted the Cocos Island about 9.15 on the morning of November 9th, and soon after detected the Emden's funnels. A short but sharp fight at once ensued. The Emden opened fire at long range, and steered a northerly course, but her 4.1 inch guns proved no match for the more powerful 6 inch guns of the Sydney, which raked her decks and carried away her funnels. When at last the Emden ran ashore on North Keeling Island she was a hopeless wreck and had suffered the loss of 230 killed and wounded. Captain Müller was captured and his sword returned to him, for he proved a gallant enemy, and his escapades had had a distinct touch of romance to them. The record of his ship showed that in two months he had captured seventeen merchantmen, valued at considerably more than a million sterling.

As a result of the victory near the Falkland Islands only two German cruisers, the Dresden and Karlsruhe, were left to carry on commerce-destroying raids. In addition, there were at large two armed merchantmen, the Kronprinz Wilhelm and the Eitel Freidrich. On March 15th the Admiralty announced the sinking of the Dresden near the island of Juan Fernandez, and on April 11th the Kronprinze Wilhelm took refuge in Hampton Roads, USA. With the destruction of the Königsberg in the Rufigi river in July the German commerce raiders came to an end.