The Year 1915 Illustrated/Victory of the Serbian Army 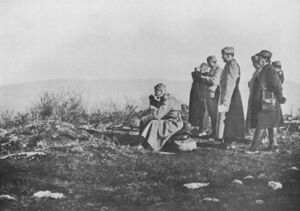 King Peter of Serbia at the Front.
Illustrated London News.

ON December 12th news reached England of an overwhelming defeat of the Austrian army at the hands of the Serbs. The news was at first received with some amount of hesitation, as it had been known that the Austrians had invaded Serbia in considerable force and previous accounts of engagements indicated the collapse of the Serbian defensive. From an account of the battle sent to England by the well-know historian, George Macaulay Trevelyan, it appears that "on December 3rd the Austrians were sweeping over the country, fully believing the Serbian resistance to be broken. The Serbians, having run short of ammunition for their artillery, had at last lost their morale, and were in full retreat. Then two things turned up suddenly – new ammunition and the old King. This put new heart into them, and, being an emotional and sentimental people, the peasants saw one of their legendary Kossovo heroes, as it were, revived in the old King, who came to tell them he was going to lead all who would follow against the Austrians to conquer or die, and that the rest had free leave to go home if they had had enough fighting.

“The pleasant democracy thereupon turned round and fell on the astonished and unprepared Austrians with the élan of a new army. They crushed the main body, and its remnants fled across the Drina; the smaller body of 100,000, who were defending Belgrade, had time to take up very strong positions, being less taken by surprise. These positions, too, were stormed after terrible fighting. The King entered Belgrade while firing was still going on. Has there often been in history such a twelve days as those of December 3rd to 15th, when a small peasant army turned the tables on the forces of a mighty empire and thrust them out of the land?” In addition to the recovery of the land of their fathers, the Serbs captured over 2,000 prisoners and valuable stores and munitions of war.