The Year 1915 Illustrated/Winter in the Western Trenches 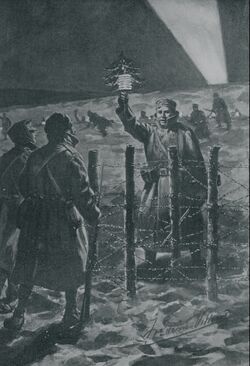 A Christmas Incident in the Trenches in the West. Sketch by Frederic Villiers.

AFTER the failure of the German armies to reach Calais, the fighting in Flanders and France settled down to trench warfare, and for three months the lines of the contending armies remained practically in the same position as we have described them after the Battle of Ypres. The main object of the Allies was to wear down the enemy and a great toll of life was exacted whenever an advance was attempted. Bombardments by heavy artillery were infrequent, and only over a front of a few miles at any one time.

This period, from December to March, was utilised by both sides as a breathing space, for the consolidating of their defensive works, the equipment of fresh units and the accumulation of stores of shells and guns. On Christmas Day, the soldiers in certain of the advance trenches appear to have forgotten their enmity for a few hours and to have exchanged greetings one with the other. The illustration on the opposite page is typical of what then occurred. But this unpremeditated truce soon came to an end, and sniping, sapping and mining were renewed with vigour and intensity.

On January 8th, Perthes was taken by the French, and on the 14th the Germans gained a slight success at Soissons. These were the two outstanding engagements of the first few weeks of the year. In February, there were one or two raids in force by French and British aeroplanes on Belgian forts in the hands of the Germans, and considerable damage was believed to have been done to submarines in course of construction. On March 10th, the Allies made their first serious attempt to pierce the German line, and an account of the British advance at Neuve Chapelle will be found on the following pages.