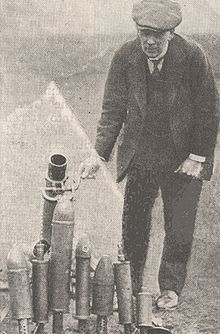 Wilfred Stokes with example of his WWI mortar and bombs.

A Trench mortar is a device that fires projectiles at low velocities and short ranges. The mortar has traditionally been used as a weapon to propel explosive mortar bombs in high-arcing ballistic trajectories. The weapon is typically muzzle-loading with a short, often smooth-bore barrel, generally less than 15 times its caliber. Modern mortars are light and easily portable. They can be used for close fire support with a variety of ammunition.[1]

The trench mortar is synonymous with the Stokes mortar, a British trench mortar invented by Sir Wilfred Stokes KBE that was issued to the British, Empire and U.S. armies, as well as the Portuguese Expeditionary Corps (CEP), during the later half of the First World War. The 3-inch trench mortar is a smooth-bore, muzzle-loading weapon for high angles of fire. Although it is called a 3-inch mortar, its bore is actually 3.2 inches or 81 mm.

The Stokes mortar was a simple weapon, consisting of a smoothbore metal tube fixed to a base plate (to absorb recoil) with a lightweight bipod mount. When a mortar bomb was dropped into the tube, an impact sensitive primer in the base of the bomb would make contact with a firing pin at the base of the tube, and detonate, firing the bomb towards the target.

The barrel is a seamless drawn-steel tube necked down at the breech or base end. To the breech end is fitted a base cap, within which is secured a firing pin protruding into the barrel. The caps at each end of the bomb cylinder were 81 mm diameter. The bomb was fitted with a modified hand grenade fuse on the front, with a perforated tube containing a propellant charge and an impact-sensitive cap at the rear.

Range was determined by the amount of propellant charge used and the angle of the barrel. A basic propellant cartridge was used for all firing, and covered short ranges. Up to four additional "rings" of propellant were used for incrementally greater ranges. The four rings were supplied with the cartridge and gunners discarded the rings that were not needed.

One potential problem was the recoil, which was "exceptionally severe, because the barrel is only about 3 times the weight of the projectile, instead of about one hundred times the weight as in artillery. Unless the legs are properly set up they are liable to injury". A modified version of the mortar, which fired a modern fin-stabilised streamlined projectile and had a booster charge for longer range, was developed after the First World War. This, in effect, became a new weapon.[2]

The above term is listed in our glossary of words and phrases of the Armed Forces of the United Kingdom of Great Britain during the Great War, which also includes: technicalities, trench slang, expressions in everyday use, nicknames, sobriquets, the titles and origins of British and Commonwealth Regiments, and warfare in general. These words and phrases are contemporary to the war, which is reflected in the language used, and have been transcribed from three primary sources (see contents). Feel free to help improve this content.
Browse other terms: Contents – A B C D E F G H I J K L M N O P Q R S T U V W X Y Z
Retrieved from "https://thelonsdalebattalion.co.uk/w/index.php?title=Trench_mortar&oldid=8591"
Category:
Cookies help us deliver our services. By using our services, you agree to our use of cookies.