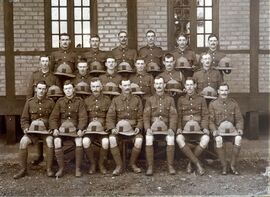 On the 29th September the 1/4th Battalion sailed from Southampton for India, its primarily role being to replace the regular 1st Battalion who were at that time stationed in Burma. When they arrived they were attached to the Burma Division and arrived at Rangoon in early December 1914.[1] Both battalions of the Regiment met only very briefly for a duration of no more than twenty minutes as their trains stopped side by side in a remote area of India.[2] The 1/4th Battalion spent the duration of the war stationed there. In February 1918 the Battalion transferred to the Jubbulpore Brigade in 5th (Mhow) Division.[1]

Colonel Wylly, C.B., author of the The Border Regiment in the Great War (book), briefly writes his only account of their actions by stating:

“On arrival in India in December 1914, the 1st/4th Battalion relieved the 1st Battalion of the Regiment at Maymyo and provided a detachment at Mandalay. Some little trouble had for months past been simmering among the tribes who inhabit the Kachin Hills on the Burma frontier, and in January 1915 a wing of the Battalion formed part of a small punitive expeditionary force which during the next few weeks moved about the country.

In August 1915 a detachment, under Lieutenant A.P. Wilson, was sent to Mesopotamia for service, and later in the year another provided a sea-patrol round the Burmese coast; but the 1st/4th Battalion The Border Regiment remained quartered in Jubbulpore in the Central Provinces. With the remainder of the service of the Battalion in the east, which did not come to an end until the winter of 1919, it should be mentioned that just after the Armistice was concluded with the Central Powers, Lieutenant-Colonel Waterlow was relieved in command of the Battalion by Lieutenant-Colonel Davidson.” [3]

The 2/4th Battalion, which was raised on the 24th October 1914 as a "second line" or home service battalion supplied many in number for the 1/4th Battalion on their departure to India. The battalion at this time was stationed at Kendal and then some time afterwards was stationed at Blackpool where they trained on the nearby beaches and countryside. German submarine activity at the mouth of the Mersey and in the Irish Channel also meant they had to patrol the coastline for possible dangers. They were billeted at South Shore and Battalion Headquarters was located at the Grand Hotel.[4] Even though the 2/4th Battalion was a home service battalion, like the 1/4th battalion, they sailed for India and spent the duration of the war there.

The 3/4th Battalion was raised simply as a "third line" or depot / training battalion and did not see front-line action in any theatre of war.

Retrieved from "https://thelonsdalebattalion.co.uk/w/index.php?title=1/4th_Battalion_(Territorial_Force)_Border_Regiment_(Cumberland_%26_Westmorland)&oldid=8225"
Categories:
Cookies help us deliver our services. By using our services, you agree to our use of cookies.