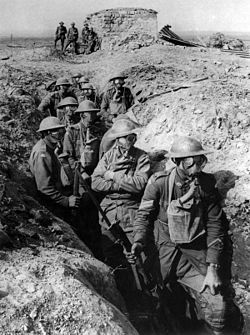 Self-contained box respirators represented the culmination of gas mask development during the First World War. Box respirators used a two-piece design; a mouthpiece connected via a hose to a box filter. The box filter contained granules of chemicals that neutralised the gas, delivering clean air to the wearer. Separating the filter from the mask enabled a bulky but efficient filter to be supplied. Nevertheless, the first version, known as the Large Box Respirator (LBR) or "Harrison's Tower", was deemed too bulky — the box canister needed to be carried on the back. The LBR had no mask, just a mouthpiece and nose clip; separate gas goggles had to be worn. It continued to be issued to the artillery gun crews but the infantry were supplied with the Small Box Respirator (SBR).

The Small Box Respirator featured a single-piece, close-fitting rubberised mask with eye-pieces. The box filter was compact and could be worn around the neck. The SBR could be readily upgraded as more effective filter technology was developed. The British-designed SBR was also adopted for use by the American Expeditionary Force. The SBR was the prized possession of the ordinary infantryman; when the British were forced to retreat during the German Spring Offensive of 1918, it was found that while some troops had discarded their rifles, hardly any had left behind their respirators.[1]

The above term is listed in our glossary of words and phrases of the Armed Forces of the United Kingdom of Great Britain during the Great War, which also includes: technicalities, trench slang, expressions in everyday use, nicknames, sobriquets, the titles and origins of British and Commonwealth Regiments, and warfare in general. These words and phrases are contemporary to the war, which is reflected in the language used, and have been transcribed from three primary sources (see contents). Feel free to help improve this content.
Browse other terms: Contents – A B C D E F G H I J K L M N O P Q R S T U V W X Y Z
Retrieved from "https://thelonsdalebattalion.co.uk/w/index.php?title=Box_respirator&oldid=19935"
Category: