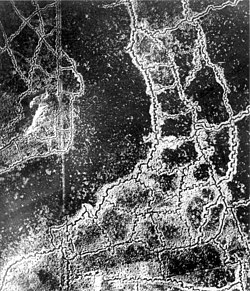 Aerial view of opposing trench lines between Loos and Hulluch, July 1917. German trenches at the right and bottom, British at the top-left.

A trench is a narrow ditch, usually deeper than it is wide, dug by troops with the primary function of providing a place of shelter from enemy small arms fire. In pre-firearm eras the use of trenches were often intended for defensive purposes, however, since the advent of more advanced weaponry, trenches have since been used for a wider scope of functions evolving to include a whole network or trench systems that, especially during the First World War, stretched for many miles. The development of the trench naturally evolved into trench warfare and a war of attrition, noted as being a "military strategy consisting of belligerent attempts to win a war by wearing down the enemy to the point of collapse through continuous losses in personnel and materiel."[1]

Trench systems, in addition to the primary front line trench, which was adjacent to the fully exposed No Man's Land, often included secondary and tertiary lines. This was a design feature to allow for troops to fall back to a second or third line of safety should the front line be overrun with enemy troops. Various other forms of communication trenches allowed for messages to be moved freely without immediate danger of enemy machine gun or sniper fire, however, trenches did not provide safety from a direct hit from trench mortars and artillery fire. An effective barrage directed on trenches had devastating effects, in many cases reducing an entire trench system to nothing more than mounds of earth. Communication trenches were also used for the moving of provisions from supply dumps located at the rear of any front line trench system. Trenches sometimes included duckboards, which was essential in aiding movement between trenches. Incessant heavy downpours often made these redundant as they would become submerged in mud or several feet of water.

Trench systems also included elaborate dug-outs. German engineering was at the forefront of dug-out design and function, many having a whole array of "luxuries" unparalleled along the Western Front. Some dug-outs were up to "thirty feet deep complete with bombproof cellars. Some even had electric light, washing apparatus, surgeries and hospital wards. In front of the trenches was belt upon belt of barbed wire up to twenty or thirty yards wide to give added protection."[2] The barbed wire was an obstacle preventing easy access to the front line trenches, especially under the cover of darkness. Both sides operated night raids, one such example undertaken by a group of Lonsdales on the night of 5 June, their objective being the German strong hold of the Leipzig Salient.

Retrieved from "https://thelonsdalebattalion.co.uk/w/index.php?title=Trench&oldid=8347"
Category:
Cookies help us deliver our services. By using our services, you agree to our use of cookies.