This wiki has no edits or logs made within the last 45 days, therefore it is marked as inactive. If you would like to prevent this wiki from being closed, please start showing signs of activity here. If there are no signs of this wiki being used within the next 15 days, this wiki may be closed per the Dormancy Policy. This wiki will then be eligible for adoption by another user. If not adopted and still inactive 135 days from now, this wiki will become eligible for deletion. Please be sure to familiarize yourself with Miraheze's Dormancy Policy. If you are a bureaucrat, you can go to Special:ManageWiki and uncheck "inactive" yourself. If you have any other questions or concerns, please don't hesitate to ask at Stewards' noticeboard. 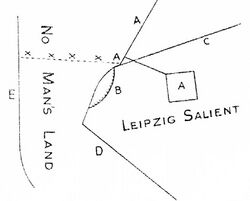 Various sources contemporary to the war have been used to compile The Lonsdale Battalion On This Day. The majority of the events shown on this day (5 June), including any supplementary notes, enlistments and statistical data etc., have been primarily sourced from the Lonsdale Battalion War Diary (November 1915 to June 1918), Record of the XIth (Service) Battalion (Lonsdale) and abridged material from Timeline and Chronology of the Lonsdale Battalion (September 1914 - May 1915), which are sourced from the original DLONS/L/13/13 Lowther Estate Archives. Events from that chronology are reproduced here with kind permission of Jim Lowther (2016). They are identified and referenced separately by their unique DLONS numbers. Please do not publish these events without prior permission from the Lowther Estate. All casualty names, numbers, ranks, date of deaths and places of burial/commemoration have been sourced from Soldiers Died in the Great War 1914-19, Volume 39, The Border Regiment and the Commonwealth War Graves Commission database respectively.
Retrieved from "https://thelonsdalebattalion.co.uk/w/index.php?title=5_June&oldid=43786"
Categories:
Hidden category:
Cookies help us deliver our services. By using our services, you agree to our use of cookies.