Percy Wilfred Machell was a soldier in the Lonsdale Battalion between 1914–1916. He attained the rank of Lieutenant Colonel and was the Battalion's Commanding Officer up to and including 1 July, 1916 when he was killed in the advance on the Leipzig Salient on the 1st Day of the Battle of the Somme. His 2nd in Command was Major W. W. R. Binning.

It wasn’t just his experience that made him a great man, it was the high esteem the men of the Lonsdales held for him. Colonel Machell was constantly busy with the preparations for running the camp at Blackhall in Carlisle, doing most of the work himself until his Adjutant Captain Diggle (the rank he held at that time) of the 6th Border Regiment was appointed on the 3rd of December (this position was later appointed to Lieutenant M Gordon).

Even with the help of his Adjutant, Colonel Machell continued with his duties making sure he could train the men in his battalion to the best of his abilities. Because many of the men had not even seen a soldier before their recruitment, Machell knew that a great deal of training and discipline would be needed. Discipline should not be confused with punishment in this respect as the men, because of their farming, labourer and shop-keeper backgrounds knew little of what was involved in the running of a battalion. It is in this regard that discipline had to be instilled into the men by Machell himself: "I have to act as drill-sergeant and buck and bark vociferously to get up to a high standard....Men take the talking well. It is much better than punishing....Far better make a man than break him." He obviously knew how best to command his men using means that were tried and tested in his previous experiences. It was no wonder he was so well respected by the men (and officers) who served under his command.

Later on Major Diggle writes about Colonel Machell describing what kind of a man he was when it came to his work in maintaining the high standards in training of the men:

Every detail had to be taught by him, for the officers, with very few exceptions, knew no more than the men, and had to be taught themselves before they could teach. The simplest orderly-room work, such as making out ‘crimes’, ‘guard reports’ and ‘detail’ etc., were done by him until the adjutant was appointed, and he always checked each of the returns personally. All attestations were made out, and recruits personally approved by him, while the separation allowances claimed his particular attention. He organized the feeding of men (the messing gained the name being the best in the Command); he arranged for hutting, the clothing, the water supply, the lighting and conservancy of the Camp, and he it was who averted a strike that threatened over the wages question among the men engaged to build the huts. These activities alone would have occupied the activities of six ordinary men, but in addition to all this the C.O. was constantly on parade, training and smartening up both officers and men, drawing up the programmes or work and seeing that they were carried out.

Not only did he care a great deal for the men, he always remained diplomatic and ensured the battalion remained one of the best trained in the northern counties. The task he had in turning ordinary men into soldiers was a difficult one but the success of the training period at Blackhall and subsequent camps, was down to the effectiveness of his approach in dealing with any situation at any given time. Without having met the man in person it is difficult to say with any certainty how much of this is true; written documents all tend to account towards Colonel Machell being everything he is portrayed as being; an experienced military officer, a well respected man amongst his peers as well as his men and his superiors. The following is a message from the Western Command to the C.O. of the battalion:

The General Officer Commanding in Chief was very much pleased with his inspection this morning. He is well aware of the difficulties under which you formed your Battalion, and he considers very great credit is due to you for the efficient training and administration of which he saw such evident proof...He is confident that wherever you go you will sustain the credit of the Western Command, and he wishes all ranks of your Battalion to be informed accordingly. He will watch their military career with the greatest interest.

With such compliments and approval noting the achievements and hard work maintained throughout the battalions training period, it is clear to see that Colonel Machell was an effective C.O. and did sterling work to produce a battalion fit for service. However, training in the camps was very different to the real action on the front lines. After their arrival in France the Lonsdales would gain much credible experience but sadly at the cost of life. Colonel Machell was a wise and great man right to the end and was missed by the men in his command.

The Lonsdale’s battalion history contains more information about Colonel Machell from his own writings about the men in his battalion and the time they spent on the front line. By reading through the battalion’s actions you will see in greater detail (along with the story of The Western Front) what the Lonsdales went through up to 1 July, 1916.

There were several appreciations of Colonel Machell printed in local and nation newspapers shortly after the announcement of his dead. There are two appreciations that I think are particularly touching. 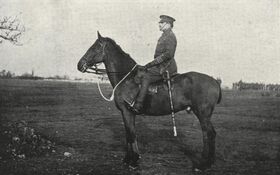 The following gives an idea of his experiences: