The home of the Lonsdale Battalion 1914-1918
(Redirected from The Lonsdale Battalion - an introduction)
The 11th (Service) Battalion Border Regiment (Lonsdale), also known as the 11th Border Regiment or simply the Lonsdale Battalion, was a service battalion formed of three detachments at Carlisle, Kendal and Workington by the Earl of Lonsdale and an Executive Committee. There were a total of four companies in the three detachments: A and B Companies from East and North Cumberland were based at Blackhall Racecourse (Headquarters), C Company from Westmorland was based at Kendal, and D Company from West Cumberland was based at Workington. Lord Lonsdale asked 52 year old retired colonial officer Percy Wilfred Machell, C.M.G. if he would consider returning to a position of command after having spent over two decades of his military career in Egypt. The Battalion soon became a well-trained, disciplined unit of volunteers that answered Field Marshal Earl Kitchener's call to arms - to fight for King and Country. Men that had grown up together enlisted together and "during these formative days of the Battalion’s earliest history it became clear to everyone in the Border Counties that this really was a Battalion of 'Pals,' of comrades, and of Border men."[2]

A detailed history of the Battalion[edit | edit source | hide] 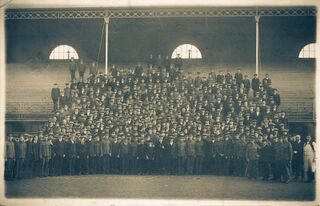 Retrieved from "https://thelonsdalebattalion.co.uk/w/index.php?title=11th_(Service)_Battalion_Border_Regiment_(Lonsdale)&oldid=35884"
Categories:
Cookies help us deliver our services. By using our services, you agree to our use of cookies.