Record of the XIth (Service) Battalion (Lonsdale) - Appendix B

The objective of this raid was to gain information about a very important part of the enemy trenches. Large mounds of earth had appeared at the point of the salient, which looked as though mining was in progress, and it was clear that there were several machine-gun emplacements in, or near, a quarry shown in our photos of this part of the German line. Another feature of the air photos was a square trench, or the “Bull’s Eye”, about 30 yards back from the front line.

The curious shape gave rise to suspicions that it was being used as a very strong point in defence, which afterwards proved to be the case.

The object of the raid was threefold:-

Volunteers were called for, and four officers—Lieut. Barnes, with Lieuts. McKerrow, Margerison and L. Machell—and 82 O.R. were chosen.

The date of the attack was not published until the actual day arrived.

Training for the raid began about three weeks before it took place, and there can be no doubt that the careful drill and rehearsal of the advance was the main cause of the final success.

A piece of ground was chosen near Bouzincourt, about three mile behind the British line, and there the section of trench to be raided was exactly reproduced with the aid of the air photographs.

The programme of training varied slightly, but nearly every night the actual advance was practised under the eye of the C.O. and the most minute details criticised and modified. During the day bomb-throwing was practiced, and the men had two hours’ physical training, also instruction in conducting prisoners and carrying wounded.

By the time the party moved from Bouzincourt to their final bivouac in Aveluy Wood, every man knew his job and his exact place in the scheme.

On the afternoon of the 4th of June the party moved to Aveluy Wood, and pitched bivouac tents under the trees among dense undergrowth, well hidden from view of aeroplanes. On the morning of the 5th it was given out to the men that the raid would be that night.

There had already been careful dress-rehearsals, and every man knew the best way to carry his kit, so when the order was given to prepare to move, everyone was ready in half an hour, with boots, revolvers, torches, and compasses, and with faces blackened. 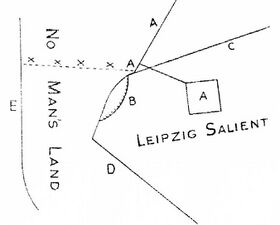 “At 5 past zero both line crawl towards about 30 X, and remain till at 7 past zero our artillery lifts on to enemy 2nd line and rear, and both lines move forward at steady double. On arriving enemy 1sy line, all pass over, leaving three men—front line—to attend to a M.G., which will be indicated”.

“2nd line passes on similarly. Each line as it goes over throws a few bombs into doors of dug-outs”

“Several enemy searchlights were in action during the bombardment on other parts of the front”.

“After the raiders had returned, a strong patrol of Lancashire Fusiliers, with two machine-guns, went out, and remained till dawn in case of counter-attack, and also brought in the wounded and dead. The prisoners are poor specimens and belong to the 6th Company, 99th Reserve Regiment”. (Note by C.O.)

Retrieved from "https://thelonsdalebattalion.co.uk/w/index.php?title=Record_of_the_XIth_(Service)_Battalion_(Lonsdale)_-_Appendix_B&oldid=15940"
Category:
Cookies help us deliver our services. By using our services, you agree to our use of cookies.