A Beautiful Building that the War has Laid in Ruins 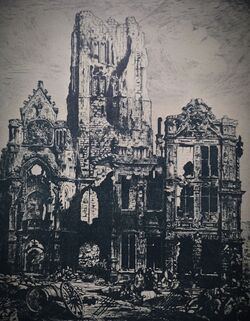 Of all the French towns in the war zone, Arras has had to suffer the most heavily from the German guns. The town has known many wars, for it forms part of the great breakwater that civilisation has built up across Europe to hold in check that flood of barbarism which threatened to overwhelm the world. That breakwater still holds, but Arras has suffered terribly; there is hardly a house that has not received its shell.

Our picture shows the western side of the half-ruined Hôtel de Ville, once one of the most beautiful in northern France, with its fine Gothic façade rising on seven arches of various sizes. It was built in the sixteenth century by Jacques Caron and restored in the nineteenth century. The lateral façades were elaborate Renaissance, the northern one was modern. The German gunners have not spared its beauty any more than they spared that of the Cloth Hall of Ypres. Their shells have torn great gaps in the walls and roof and shattered the graceful belfry in which hung the old bells used for ringing the curfew and the alarm in time of war. The largest of the bells, the "Banclocque" or "Joyeuse," weighed nearly nine tons and dated from 1728.