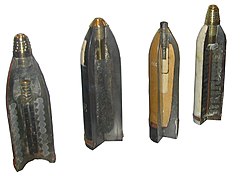 A shell is a payload-carrying projectile that contains an explosive or other filling. Modern-day shells are manufactured in a variety of different shapes, sizes, payloads and function, the primary function being to successfully immobilise or destroy any given target from a safe distance. There are several types, these namely being: high explosive, armour-piercing, shrapnel, cluster, chemical and non-lethal shells.

All explosive- and incendiary-filled projectiles, particularly for mortars, were originally called grenades, derived from the pomegranate, so called because the many-seeded fruit suggested the powder-filled, fragmenting bomb, or from the similarity of shape. Words cognate with grenade are still used for an artillery or mortar projectile in some European languages. Shells are usually large-calibre projectiles fired by artillery, combat vehicles (including tanks), and warships. Generally, they have the shape of a cylinder topped by an ogive-shaped nose for good aerodynamic performance.

In 1784, Lieutenant Henry Shrapnel of the Royal Artillery developed the shrapnel shell as an anti-personnel weapon. His innovation was to combine the multi-projectile shotgun effect of canister shot, with a time fuse to open the canister and disperse the bullets it contained at some distance along the canister's trajectory from the gun. His shell was a hollow cast-iron sphere filled with a mixture of balls and powder, with a crude time fuse. If the fuse was set correctly, then the shell would break open, either in front or above the intended target, releasing its contents (of musket balls). The shrapnel balls would carry on with the "remaining velocity" of the shell.

Shrapnel's original design went through several further designs over the next 100 years. The final shrapnel shell design used a much thinner forged steel shell case with a timer fuse in the nose and a tube running through the centre to convey the ignition flash to a gunpowder bursting charge in the shell base. The use of steel allowed the shell wall to be made much thinner and hence allow space for many more bullets. It also withstood the force of the powder charge without shattering, so that the bullets were fired forward out of the shell case with increased velocity, much like a shotgun. This is the design that came to be adopted by all countries and was in standard use when the First World War began in 1914. However, by the end of the war the shrapnel shell for anti-personnel use would see it become obsolete.

The mid 19th century saw a revolution in artillery, with the introduction of the first practical rifled breech loading weapons. The new methods resulted in the reshaping of the spherical shell into its modern recognisable cylindro-conoidal form. This shape greatly improved the in-flight stability of the projectile and meant that the primitive time fuses could be replaced with the percussion fuse situated in the nose of the shell. The new shape also meant that further, armour-piercing designs could be used.

During the 20th Century, shells became increasingly streamlined. During the First World War, ogives were typically two circular radius head - the curve was a segment of a circle having a radius of twice the shell calibre. After that war, ogive shapes became more complex and elongated. From the 1960s, higher quality steels were introduced by some countries for their HE shells, this enabled thinner shell walls with less weight of metal and hence a greater weight of explosive. Ogives were further elongated to improve their ballistic performance.[1]

The above term is listed in our glossary of words and phrases of the Armed Forces of the United Kingdom of Great Britain during the Great War, which also includes: technicalities, trench slang, expressions in everyday use, nicknames, sobriquets, the titles and origins of British and Commonwealth Regiments, and warfare in general. These words and phrases are contemporary to the war, which is reflected in the language used, and have been transcribed from three primary sources (see contents). Feel free to help improve this content.
Browse other terms: Contents – A B C D E F G H I J K L M N O P Q R S T U V W X Y Z
Retrieved from "https://thelonsdalebattalion.co.uk/w/index.php?title=Shell_(projectile)&oldid=8902"
Category:
Cookies help us deliver our services. By using our services, you agree to our use of cookies.