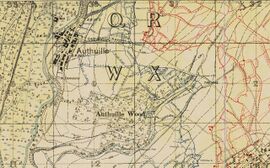 Trenchmap showing the French commune of Authuille, the nearby woods and the Leipzig Salient. The village was in British held territory during the Somme Campaign, There are several references of Authuille Wood in the Lonsdale Battalion War Diary up to 2 July, 1916.

The above term is listed in our glossary of words and phrases of the Armed Forces of the United Kingdom of Great Britain during the Great War, which also includes: technicalities, trench slang, expressions in everyday use, nicknames, sobriquets, the titles and origins of British and Commonwealth Regiments, and warfare in general. These words and phrases are contemporary to the war, which is reflected in the language used, and have been transcribed from three primary sources (see contents). Feel free to help improve this content.
Browse other terms: Contents – A B C D E F G H I J K L M N O P Q R S T U V W X Y Z
Retrieved from "https://thelonsdalebattalion.co.uk/w/index.php?title=Authuille_Wood&oldid=42281"
Categories:
Cookies help us deliver our services. By using our services, you agree to our use of cookies.