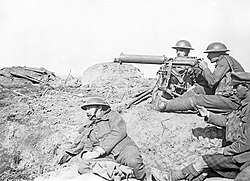 Vickers machine gun in the Battle of Passchendaele, September 1917. 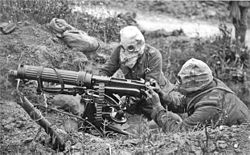 The Vickers machine gun or Vickers gun is a name primarily used to refer to the water-cooled .303 British (7.7 mm) machine gun produced by Vickers Limited, originally for the British Army. The machine gun typically required a six to eight-man team to operate: one fired, one fed the ammunition, the rest helped to carry the weapon, its ammunition and spare parts. It was in service from before the First World War until the 1960s, with air-cooled versions of it on many Allied First World War fighter aircraft.[1]

The weapon had a reputation for great solidity and reliability. Ian V. Hogg, in Weapons & War Machines, describes an action that took place in August 1916, during which the British 100th Company of the Machine Gun Corps fired their ten Vickers guns continuously for twelve hours. Using 100 barrels, they fired a million rounds without a failure. "It was this absolute foolproof reliability which endeared the Vickers to every British soldier who ever fired one."[1]

The Vickers machine gun was based on the successful Maxim gun of the late 19th century. After purchasing the Maxim company outright in 1896, Vickers took the design of the Maxim gun and improved it, reducing its weight by lightening and simplifying the action and substituting components made with high strength alloys. A muzzle booster was also added.

The British Army formally adopted the Vickers gun as its standard machine gun on 26 November 1912, using it alongside their Maxims. There were still great shortages when the First World War began, and the British Expeditionary Force was still equipped with Maxims when sent to France in 1914. Vickers was, in fact, threatened with prosecution for war profiteering, due to the exorbitant price it was demanding for each gun. As a result, the price was slashed. As the war progressed, and numbers increased, it became the British Army's primary machine gun, and served on all fronts during the conflict. When the Lewis machine gun was adopted as a light machine gun and issued to infantry units, the Vickers guns were redefined as heavy machine guns, withdrawn from infantry units, and grouped in the hands of the new Machine Gun Corps (when heavier 0.5 in/12.7 mm calibre machine guns appeared, the tripod-mounted, rifle-calibre machine guns like the Vickers became medium machine guns). After the First World War, the Machine Gun Corps (MGC) was disbanded and the Vickers returned to infantry units. Before the Second World War, there were plans to replace the Vickers gun; one of the contenders was the 7.92 mm (.312 in) Besa machine gun (a Czech design), which eventually became the British Army's standard tank-mounted machine gun. However, the Vickers remained in service with the British Army until 30 March 1968. Its last operational use was in the Radfan during the Aden Emergency. Its successor in UK service is the L7 GPMG.[1]

The above term is listed in our glossary of words and phrases of the Armed Forces of the United Kingdom of Great Britain during the Great War, which also includes: technicalities, trench slang, expressions in everyday use, nicknames, sobriquets, the titles and origins of British and Commonwealth Regiments, and warfare in general. These words and phrases are contemporary to the war, which is reflected in the language used, and have been transcribed from three primary sources (see contents). Feel free to help improve this content.
Browse other terms: Contents – A B C D E F G H I J K L M N O P Q R S T U V W X Y Z
Retrieved from "https://thelonsdalebattalion.co.uk/w/index.php?title=Vickers_machine_gun&oldid=8643"
Category: