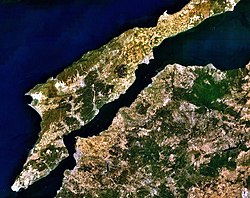 The Dardanelles is a narrow strait in the northwestern area of Turkey that connects the Aegean Sea with that of the Sea of Marmara. Roughly 38 Miles (61 kilometers) long, it varies in width from 3/4 miles at its narrowest to 4 miles at its widest (1.2 to 6 kilometers). The strait connects the Black Sea to the Mediterranean Sea; in addition to this it separates mainland Europe (on the western side of the Gallipoli peninsula) to that of mainland Asia (on the eastern side).

Chronological events that took place in the Dardanelles.[1]