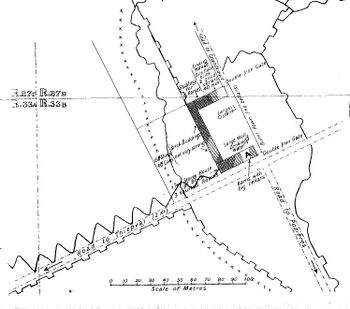 Mouquet Farm was built around c.1855 and consisted of barns, stables for 15 horses, living quarters, a courtyard and well. Located at A on the map under the barns were two large cellars with windows roughly a metre square above the the level of the ground, which gave a good vantage point for rifle and machine gun fire. A shelter at the farm could accommodate many men as well as the headquarters staff. The facilities there included a telephone exchange, water supply, pumping equipment and medical and rest amenities. This was the 99 RIR Battle HQ.

Work on the defences of the farm were overseen by Major Von Fabeck. He, the son of Field Marshall Paul von Hindenburg, was a very meticulous man, issuing orders upon inspection, to all defences under his control and ensured that any opposing force would find it extremely difficult to get through their defences. Von Fabeck was correct. Mouquet Farm proved to be well defended. With its close proximity to the village of Thiepval and the complexities of breaking through the German lines, it took 3 months after the 1 July 1916 push for the British to finally gain control and destabilise the German positions, all at the cost of many lives.

The photograph to the right shows some damage to the rear building; the rest seems to show total destruction, nothing more than a pile of rubble.

The plan of the farm gives a rough idea of dimensions, the buildings were there and an outline of the German defences. Fires destroyed another wing of the complex in September 1914.

The above term is listed in our glossary of words and phrases of the Armed Forces of the United Kingdom of Great Britain during the Great War, which also includes: technicalities, trench slang, expressions in everyday use, nicknames, sobriquets, the titles and origins of British and Commonwealth Regiments, and warfare in general. These words and phrases are contemporary to the war, which is reflected in the language used, and have been transcribed from three primary sources (see contents). Feel free to help improve this content.
Browse other terms: Contents – A B C D E F G H I J K L M N O P Q R S T U V W X Y Z
Retrieved from "https://thelonsdalebattalion.co.uk/w/index.php?title=Mouquet_Farm&oldid=8701"
Categories:
Cookies help us deliver our services. By using our services, you agree to our use of cookies.