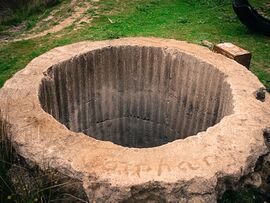 The RE Well was a 10ft deep concrete well built by 135 Company of the Royal Engineers during the Gallipoli Campaign of the First World War. It is located in Gully Ravine on the norther side the peninsula between X and Y Beaches and was dug in late July 1915. A record of the work undertaken can be found in Joseph's Murray's book, Gallipoli as I saw it. The Gully was one of the few places where fresh water could be obtained. Today, the water is fouled and there is no grill covering the opening. In the nearby undergrowth is a Pill Box. This is post-First World War, but serves as a reminder of the strategic importance of this place. Crossing the old stream bed, it is possible to scramble up onto Gully Spur. It is here there are all kinds of traces of trenches and various other workings.

The above term is listed in our glossary of words and phrases of the Armed Forces of the United Kingdom of Great Britain during the Great War, which also includes: technicalities, trench slang, expressions in everyday use, nicknames, sobriquets, the titles and origins of British and Commonwealth Regiments, and warfare in general. These words and phrases are contemporary to the war, which is reflected in the language used, and have been transcribed from three primary sources (see contents). Feel free to help improve this content.
Browse other terms: Contents – A B C D E F G H I J K L M N O P Q R S T U V W X Y Z
Retrieved from "https://thelonsdalebattalion.co.uk/w/index.php?title=RE_Well&oldid=8105"
Category: