8th Battalion in the Battle of the Somme (Second & Third Phase)

The second phase of the Battle of the Somme started on the 23 July 1916, and for the purpose of this brief history it should be noted that the 8th Border Regiment did not actively take part, however, this does not mean that their involvement was any less important. Only two battalions of the Border Regiment effectively took part in this phase, namely the 2nd and 7th Battalions, but it could be stated that their successes were emphatically linked to the efforts of the other battalions along different parts of the line. At the end of the first phase the 25th Division, to which the 8th Borders belonged, were relieved by the 48th Division and at this time moved to a location not far from Beauval where they held a sector of the line from the River Ancre running in northwards direction. Between the 23 July and 10 August this section of line was held without any physical offensive operations taking place, yet much work was done by way of digging new assembly trenches (which were later used for attacking German defences south of here and in the fighting on Beaumont Hamel) and providing assistance for other units when it was required. It was also around this time that trench mortars were used against the 25th Division, which in itself is nothing particularly unusual, however, this was the first time the enemy had used poison-gas, a new weapon that had a dramatic and devastating effect on trench warfare. 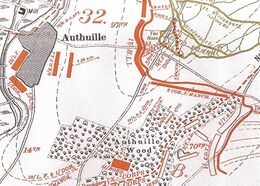 Map showing the Leipzig Salient in the neighbourhood of Authuille (just south of Thiepval) and the British units that attacked on the 1st July 1916.

During the month of August, there was a short period of rest at Bus en Artois and later the Division was involved with a number localised engagements, then in September, working with the 29th Division, they attacked along the Thiepval Spur. As mentioned in the previous paragraph the 8th Battalion did not actively participate in the fighting during the second phase and so the action seen here at this time did not include them for they were holding the front-line trenches at a particularly notorious and well-defended section of the enemy line called the Leipzig Salient. The 25th Division then moved to the front area of Thiepval on the 25 September, and by this time the second phase had ended the third phase had officially begun. The 8th Border Regiment were for a short while in the trenches at Ovillers where they were involved in various aspects of training, then as soon as they moved up to the area of Pozières to relieve the Canadians their casualties mounted. The duties of working hard on the communication trenches and the forward dumps commenced in light of a further advance being made. As a result the 39th Division moved its front to Stuff Redoubt and the 74th and 75th Brigades of the 25th Division aligned themselves to the right holding roughly 2000 yards of front line between them. Heavy rain was the cause of a postponement in the attack that every unit had been working towards. Instead of the 19 October, it was going to take place on the 21st and as detailed in the attack plans the 25th Division began its attack on Stuff and Regina Redoubts covering a distance of between 200 and 500 yards. It was due to the effectiveness of the British bombardment beforehand that the enemy gun emplacements and various other strong-points were disabled allowing for a much easier transition from the British lines forward.

The 8th Border Regiment's involvement in this is as follows. Their objectives were to work in conjunction with the 11th Cheshire Regiment of the same Brigade to take a section of Regina Trench some 350 yards long. They assembled at 6am along Hessian Trench and awaited for the orders to attack. Once given they attacked in four waves[1] of half-company columns making their way across No Man's Land that was to their surprise more tolerable than expected. The shell fire hadn't, as in other occasions, totally devastated their forward route and crossing this ground was much easier than expected making for a hurried approach. While this might have seemed like a good idea at the time, the speed at which they crossed No Man's Land was the cause of several casualties. This was because the British barrage was still firing when the leading wave arrived at their objective before the barrage was lifted, however, when ceased the men continued through the well-cut wires as planned. The attack was so successful that within ten minutes they were collecting German prisoners, sending them back and ensuring that the enemy trenches and dug-outs were no longer a threat by systematic bombing and clearing. The men were so surprised at the ease of the initial attack that, according to Colonel Wylly:

“When the trench was reached on the left the men got in so easily that they did not realise they had gained their objective; a gap was also left on the right owing to opposition from a machine gun in a large dug-out on this flanks; while from dug-outs and emplacements on the left of Stump Road Germans were seen to be emerging. Within a minute of reaching Regina Trench some officers and about 80 men, of whom 40 were Border men, left the trench and made straight across for them, but Captain Stewart recalled these men and got them to work on the trench; finding that while he was in touch with the 8th South Lancashires on the left the right had been held up, he ordered a block to be made here until more men could be collected.”[2]

Captain Stewart appears to have made the correct decision in ordering his men back to work on the trench that they had just acquired. If the men had tried to track down the escaping German troops it would have weakened their immediate location and so ordering a block to be made until further men arrived seemed to have paid off. Colonel Wylly continues stating that:

“Lieutenant E.D. Birnie was now sent up with all the bombers remaining at Battalion Headquarters to try and get touch with with Captain Stewart by bombing up the communication trench, but on arrival he found that the dug-out just beyond the block was ablaze and he was unable to get past, but under cover of the smoke he managed to get his squad, and 10 other bombers whom he had collected en route, man by man to Regina Trench, where was Captain Stewart, with only one casualty. He now got to work in a very gallant manner, standing up on the parapet and firing on the enemy while his party worked up the trench. Lieutenant Birnie accounted for about 8 of the enemy when the rest in number, surrendered. The trench was cleared, touch gained and consolidation proceeded unhindered.”[2]

Through their planning, hard work and successful outcome the 25th Division was able to capture 731 enemy troops, 5 officers, 3 field and 19 machine guns, however, as a result of this the 8th Border Regiment's casualties numbered 162. Captains T.D. Miller, M.C., and W.P. Watson-Thomas along with 18 other ranks were killed; Lieutenant Le May and another 111 other ranks were wounded and 30 men were missing. The Division was relieved on the night of the 22 October and marched back to Doullens where it was inspected by the Commander-in-Chief. The following appreciative message was passed on to all men of the Division:

“It was with great regret that the Commander of the Reserve Army bids farewell to Major-General Bainbridge and the 25th Division. This Division has the proud distinction of having served longer in the Somme Battle than any other in the Army. During the past four months it has been successful in many engagements, has taken many prisoners, and has inflicted very heavy losses on the enemy. These successes are due to good leadership and sound organisation in the higher ranks, and to a spirit of cheerfulness, courage and resolution in the junior ranks, officers and men. It has every reason to be proud of these achievements and this spirit.”[2]

And so ended the 8th Battalion's involvement in the Battle of the Somme. Although seven battalions of the Regiment took part in this battle throughout the four and half month period it endured, each of these battalions did their share, whether it was fighting on the front lines, providing working parties or training, they all played their part and contributed to the general successes of the what was to become one of the bloodiest battles in war history. The Battle of the Somme cost the Border Regiment many lives of fine Cumberland and Westmorland men who are forever remember on memorials and cemeteries far and wide, in our stories and in the hearts of an individual's descendants. Field Marshall Sir Douglas Haig's Despatch of 23 December 1916[3] pays a fitting tribute to the role of the troops along portions of the line, a role that he believes to have been neither light nor unimportant:

“Their role was a very trying one, entailing heavy work on the troops and constant vigilance on the part of Commanders and Staffs. It was carried out to my entire satisfaction, and in an unfailing spirit of unselfish and broad-minded devotion to the general good, which is deserving of the highest commendation. Some idea of the thoroughness with which their duties were performed can be gathered from the fact that in the period of four and a half months from the 1st July some 360 raids were carried out, in the course of which the enemy suffered many casualties and some hundreds of prisoners were taken by us. Our troops penetrated deeply into the enemy's defences, doing much damage to his works and inflicting severe losses upon him....Among all the long roll of victories borne on the colours of our regiments, there has never been a higher test of the endurance and resolution of our infantry. They have shown themselves worthy of the highest traditions of our race, and of the proud records of former wars.”[4]

The 25th Division left the Fifth Army and then on the 28 October it entrained for Caestre in the general area of the Second Army. The 8th Border Regiment took over the Ploegsteert Sector[5], which regarding the activities of the enemy seemed fairly quiet in comparison to some of the other sectors. The Battalion was kept busy with fatigues up until Christmas and including most of January 1917.