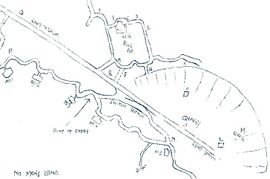 The Granatloch was the German word for the chalk quarry or Leipzig Redoubt, located at the western end of the Leipzig Salient. It formed part of the defences at this location and was held strongly with machine gun posts. It had a clear view of the land that sloped downhill towards the British front line, which is why it was seen as an otherwise important and strategic vantage point.

Today, the immediate area doesn't resemble its former self during the bitter conflicts that took place here during the First World War; land was farmed before and after the war but the constant fighting and shelling changed the landscape forever. Inside the Granatloch trees and other plant growth portray a featureless quarry, but in its day this whole area would have looked very different. Before the week-long British bombardment that commenced on 24 June 1916 the defences would have been intact and impressive to look at, as seen at the Leipzig Redoubt. Afterwards, the land looked almost unrecognizable with trench systems partly destroyed (the bombardment did not have the full effect the British Generals wanted) and others completely obliterated.

The track seen in the top right photo is the track that runs from Authuille Wood to Thiepval. The Lonsdales that survived the machine gun fire upon leaving the relative saftey of Authuille Wood were leaderless moments later but some managed to reach the Granatloch with men from Highland Light Infantry and take hold of this position and keep it. Other sectors did not have the same success.

The above term is listed in our glossary of words and phrases of the Armed Forces of the United Kingdom of Great Britain during the Great War, which also includes: technicalities, trench slang, expressions in everyday use, nicknames, sobriquets, the titles and origins of British and Commonwealth Regiments, and warfare in general. These words and phrases are contemporary to the war, which is reflected in the language used, and have been transcribed from three primary sources (see contents). Feel free to help improve this content.
Browse other terms: Contents – A B C D E F G H I J K L M N O P Q R S T U V W X Y Z
Retrieved from "https://thelonsdalebattalion.co.uk/w/index.php?title=Granatloch&oldid=8702"
Categories:
Cookies help us deliver our services. By using our services, you agree to our use of cookies.